Starmen.net is the Central American Earthbound fan-site for all your needs on Earthbound (Mother 2), it's prequel Earthbound Zero (Mother), and the recently released sequel, Mother 3. Home to one of the largest fan-communities for a game I've ever seen. :P

Dragonball Multiverse is not as much a story in a traditional written sense as it is a fancomic [or fanmanga, whatever you wanna call it :P]. Although the story begins centered around a Z-Senshi group from another alternate universe where GT never happens[however unlike Misfits, it is still 10 years after the end of Z], they are quickly qualified to compete in a Multiversal Fighting Tournament where they will be changed forever by some of what they witness, as will those who encounter them from the other universes. This fancomic is also a sort of "dream match" situation where various battles that also never happened in normal DB continuity can happen. One such being "Nail vs. Recoome" for example,  and another being "Dabura vs. Cell", two battles that fans love to speculate about constantly. The description doesn't really tell enough, so go to the darn site already and read it. At the least it has a one-up on Misfits due to having an actual artist making visual panels for it [even if only in traditional black-and-white format], unlike we do. :( 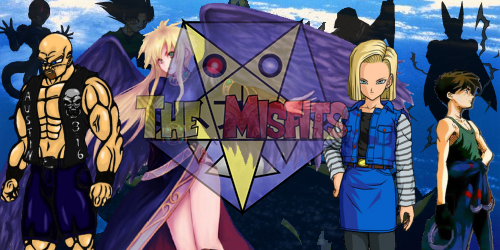 Please use the banner above if you intend to link to us through banners. :P

The HTML code is: